Origin of the UAA logo 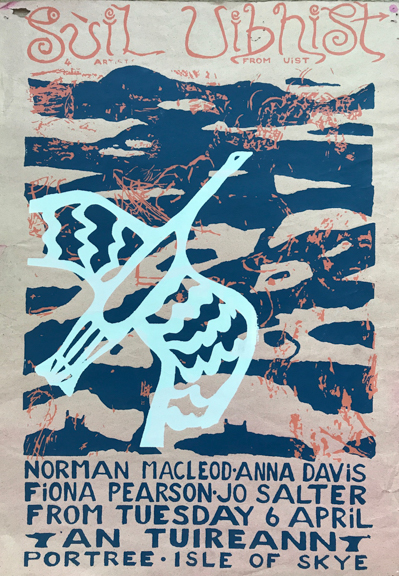 A Blast from the Past
by Anna Davis

Has it been 28 years, I was surprised to hear from Catherine asking if I still had an original copy of the swan print that has been used as the UAA logo as they only had a low res scan. Hmm, I’ll have a look and there it was, buried in a portfolio the poster that we designed for our Suil Uibhist exhibition in Portree with Fiona Pearson, Jo Salter and Norman Macleod in 1992.

I seem to remember that it was a joint effort and my part the swan cut out and print. Taigh Chearsabhagh was still an idea and I was pregnant with my daughter Jasmine, life was to change as a new mum and an involvement in the growing art scene in Uist. It was a wonderful journey to see the art centre and museum grow andflourish, I had the opportunity to meet artists, poets and islanders, so many good memories, Rhodas café and salmon sandwiches being up there among the highlights.

I think the swan print caught something I felt about the island, home of lapwings, curlews and whooper swans migrating from Iceland and the sense of exposure, openness, sky and freedom, I’m delighted it still represents the UAA.

More from Anna Davis at annadavisstudio.co.uk