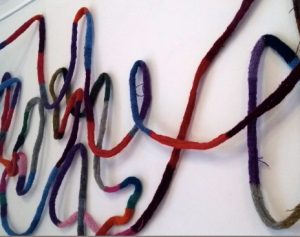 Gina MacDonald is the first local artist featuring in a rolling program of exhibitions by Uist Arts Association’ artists in the Taigh Chearsabhagh cafe.
Her show is called Snaithlean:
“My work is based on dementia, connections and repetition. I use traditional crafts influenced by my Hebridean culture and heritage to visualise the illness. The contrasting elements of the work relate to the complex and diverse progress that are characteristic of the condition. I explore the relevance of craft and vernacular references in association with sensory and muscle memory. Works in 2 and 3D are open to viewer interaction to highlight the benefits of touch. The knitted and woven pieces refer to the unravelling of the consistent uniformity in weave and suggest isolation, but not absence, of memories in the mind”. – Gina MacDonald
Snaithlean will run from the 23rd of August until the 29th of September at Taigh Chearsabhagh, Lochmaddy